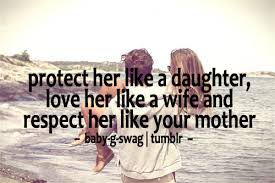 Women leave because they have had enough! That’s the bottom line…no magic formula, no special reason, nothing dramatic, as plain and simple as that.

Women need to feel loved, cherished and special.  What’s wrong with that?  I for one, do not think that is too much to ask for.  In fact, I think it should be part of anyone’s daily routine to love the special person in their life.  Yes, that often…and yes, it is a two-way street.  I am going to boldly assume that this is a desire of the majority of the population, irrespective of whether they are male or female.

I sometimes wish there was a shop where you could buy that feeling in a bottle, just to sniff a little bit at a time…

Anyway, coming back to the reason why women leave.  The feeling I just got you to remember above, that’s gone, vanished into thin air if you like.  It’s as if it never existed to begin with.  It also did not happen over night, in fact, it happened right in front of your very eyes, while you were wide-awake.

No-one goes into a relationship deliberately sabotaging it.  Life happens and more importantly, we grow as individuals…we change, some of us more so than others but that’s not the point.

The key to a successful relationship, is RESPECT.  Just like the song…“R.E.S.P.E.C.T…find out what it means to me, just a little bit…”(for those of you who know it).

Respect each other’s needs.  Respect that the love you share is special and should not be tainted by outside interference.  Place it in a protective bubble and guard it with your life…A bit too dramatic? I think not!

Ever hear the saying “You don’t know what you’ve got until it’s gone?”  Well those words are very apt in this example. 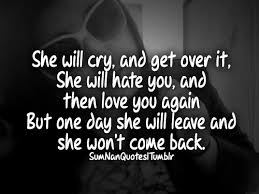 Another thing is seeing the other person as your equal.  Don’t try and run away with the idea that “I was raised in a house where my father was the head of the house and my mom did everything for him”.  Bullshit! If that’s the relationship you want, then go and marry someone from that era…times have changed and so have the women of this world you live in.  When you see the other person as your equal, you will realise that they are just as tired as you are at the end of a long work day.  It doesn’t matter that she works less hours than you, it doesn’t matter that you do more physical labour than her and she sits in a “cushy” air-conditioned office.  Mental tiredness is just as bad as Physical tiredness.

Realise that when you get married, there are responsibilities which need to be shared.  When you add children to that equation, the responsibilities don’t miraculously decrease, in fact…it does the exact opposite.  It’s a two-way street, you HAVE to GIVE as much as you GET.  Take turns if that works for you but always, keep each other in mind in everything that you do.  Make TIME for each other…your kids and everything else is important but remember, It all STARTED with the TWO OF YOU.

The things I’ve mentioned above, are but a few opportunities for things to go wrong.  There are many…

To spell it out for you, women don’t make a decision to leave over night.  They have thought long and hard, they have fought battles and power struggles within themselves.  They have spoken calmly to you about what’s bothering them, thrown subtle hints to re-emphasize what they were trying to say in the first place.  There have even been times where they acted so out of character, that they seemed to have lost the plot – turning into an evil demon-possessed lunatic!  They have even parked it for a good few months, sometimes years.  And all you have heard and seen, is them becoming a nag…Always complaining about everything and never being happy.  Really?  Do you seriously believe that for one minute?

At the point of deciding to leave, it is quite possible, that they have thought long and hard about how and why they are going to do just that.  More importantly, they have realised that life only lasts so long and that they truly have no control.  With this in mind, it is quite easy to make the decision to leave because who wants to spend the rest of their life being unhappy?  I can’t think of one sane person who would willingly do this, if they knew that they only had a few months or years left to live.  I would rather be happy without you than be unhappy with you…and that’s the bottomline.

So before it’s too late…give her a little attention, a kind word, a generous act and a little bit of that person she fell in love with.

Feel free to leave a comment, connect with me via any of the following:

Favorite me at Smashwords: https://www.smashwords.com/profile/view/SkyeWaters33